I’m thrilled to have been asked to join 411fit.com‘s bloggers and I look forward to helping motivate and inspire YOU because I know that you will do the same for ME!  Together, we can do this! And I can GUARANTEE you that no matter how much you have to lose – whether it’s 10 lbs or 110 lbs – if you start to make small changes in your life today, you’ll be SO glad you did!  Just imagine where YOU could be in just one year from now!

For almost my entire adolescent and adult life, I’ve begun each new year saying “I want to lose weight.” I’d try for a month or two but then get frustrated with the process when the weight didn’t come off fast enough, thinking, “This isn’t working!”  I’d end up disappointed with myself, feeling as though I failed…yet again. What I know now, but failed to realize at the time, is that the only “failure” was having given up!  Weight loss is not a race and EVERY ounce lost was a step in the right direction!

I began the journey to re-claim myself in 2009 when I declared it to be “The Year of Me!”  I finally sought help for the extreme upper back pain I’d been dealing with for four years after it had gotten so bad that I was having visions of a wheelchair in my not-so-distant future. I was given a diagnosis of Myofascial Pain Syndrome, which is a chronic condition that affects the fascia (the connective tissue covering the muscles) and to help alleviate the pain, I was told I needed to strengthen and stretch my muscles.  Apparently the years of general inactivity and sitting at a desk job had caused weakness.  But deep down I knew what nobody – not even my doctor or physical therapist – was willing to come right out and say… that being 100+ lbs overweight was not helping me.   In fact, it was hurting me – literally!

I started to workout sporadically on my own and then signed up for my (former) company’s wellness plan with Salus, Inc. in Delafield, WI, run by 411fit.com’s own Briana and Michael Boehmer.  I was pushed beyond belief, gained confidence in my abilities and became extremely strong in a relatively short amount of time!  I felt better than ever but despite working out intensely 4-6 days/week, I’d only managed to lose 12 lbs during 2010. It was a loss, but come on…a ONE pound per month average?  With as much as I was working out, it should have been coming off MUCH faster.  Michael and I joked around a lot but during one discussion about my food journaling (or lack thereof), he looked at me and calmly said, “You know what you need to do.”  I knew I was standing in my own way.

Two months later, after a long discussion with my sister, Laura, we decided that we would begin Weight Watchers together.  We were both ready to make changes in our lives and that meant getting the food under control.  We went to our first meeting on January 11, 2011 and it was one of the best things that we’ve both ever done for ourselves!  My average loss has been slow but I have learned many things about myself along the way. I have been extremely reflective during my journey and I am focusing on finding balance and making true changes in my life that will not only help me get to my goal, but ensure that I stay there once I do! Am I glad I started a year ago?  Absolutely!   Just look at the difference! 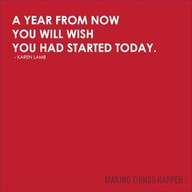 Like you, I am going through this journey right now.  I’m well acquainted with the negative self-talk, the embarrassment and the excuses that come with being overweight.  I have lived with the doubt, the struggles and the damage it does to your confidence and self-esteem on a daily basis.  I’ve heard the whispers and the assumptions of laziness or “simple” lack of willpower.  Oh if it were only that simple, right?!  I’ve had to listen to well-meaning people who’ve never had a weight problem lecture me on how I should go about losing my weight.

But, more importantly, I know what it feels like to start to believe in yourself again and I know what it feels like to have had that “click” in your brain that says “I AM worth it!” and “I don’t belong in this body any more!”  I also understand how important it is to have the support of someone (or thousands of others!) going through the same thing and/or with someone who believes in you…even when you don’t.

So if you’ve been on the fence…or you need a gentle push back into action, go to www.411Fit.com today and register. It’s free for individuals. Start today!

If you’re a trainer or a health coach, 411Fit just launched a new coaching dashboard to help you track your clients more easily and with greater interaction. The best part? They’re offering 45 days free! Click here to learn more or sign up today!